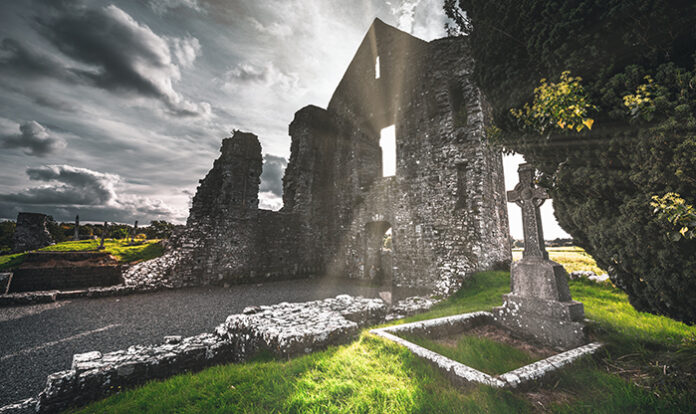 Tomorrow is St. Patrick’s Day, when we celebrate his life and legacy. However, this celebration didn’t begin until 1631, almost 1200 years after his death. Since I love Ireland, I thought I’d do a little research on its patron saint. Maybe you already knew this, my kids did, but Saint Patrick wasn’t a canonized saint, and he wasn’t Irish. I know, shocking, however, I don’t want to focus on what he was not, but what he was—an obedient follower of Jesus, who brought Christianity to Ireland. For the history purist, there was another missionary before Patrick, but he wasn’t very successful, or we might celebrate St. Palladius’ Day.

Patrick was born around 387. As a teenager, Patrick was kidnapped from Scotland/England and taken to Ireland where he was a slave for several years. During this time he developed a strong faith, clinging to God in the midst of pagan Ireland. Before his captivity, his faith was lackluster at best.

After experiencing a vision that led Patrick to his rescuers, he escaped his captor, a chieftain, who would eventually become one of his converts. Patrick spent years in a monastery where he learned about God and then became a priest and then a bishop.

Soon after, he followed God’s call to Ireland. His strategy was to convert the clan chiefs, so they would lead their people to God. However, this was dangerous business and his life was constantly in danger. Eventually, Patrick converted a powerful chief, akin to the king, and baptized him. Patrick spent about 40 years ministering to the Irish people and planting churches across the Island. He died on March 17, 461 and is buried in Northern Ireland. 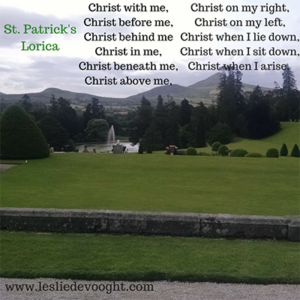 Two parts of Patrick’s story strike a chord with me. The first part that he didn’t embark on this part of his life until he was 40. It seems it’s never too late for God to change our lives and send us on a mission for him.

The second part is the faith and courage it must have taken to approach these pagan chiefs. In his own words, he writes in the Confession, “I [was] a sinner, a simple country person, and the least of all believers. I [was] looked down upon by many.” This reminds me how God chooses the least likely to his greatest works and the courage that only God can provide in the face of impossible odds.

Tradition holds that St. Patrick wrote the following prayer before meeting with the powerful Irish King. However, some question his authorship. Regardless, the Lorica of St. Patrick is a beautiful expression of our relationship with Jesus and a hymn of protection. A Lorica is the breastplate in a coat of armor, like the one Paul tells us to wear in Ephesians six.

As you celebrate, I pray you keep St. Patrick’s words in your heart and remember they apply to each of us as well. Jesus loves us all and is always with us. God protects us and gives us his mighty power when we do his work just like St. Patrick.

What do you need God’s strength for today? Is God calling you to try something new, serve in a new and even scary way? How will you answer? May this be our prayer every morning. (Many people only pray the bold section; however, I wanted to share it in its entirety.) I’d love to hear your thoughts, share below in the comments.

The Lorica of St. Patrick
I arise today
Through a mighty strength, the invocation of the Trinity,
Through belief in the Threeness,
Through confession of the Oneness
of the Creator of creation.

I arise today
Through the strength of the love of cherubim,
In the obedience of angels,
In the service of archangels,
In the hope of resurrection to meet with reward,
In the prayers of patriarchs,
In the predictions of prophets,
In the preaching of apostles,
In the faith of confessors,
In the innocence of holy virgins,
In the deeds of righteous men.

I arise today, through
The strength of heaven,
The light of the sun,
The radiance of the moon,
The splendor of fire,
The speed of lightning,
The swiftness of wind, the depth of the sea,
The stability of the earth,
The firmness of rock.

I arise today, through
God’s strength to pilot me,
God’s might to uphold me,
God’s wisdom to guide me,
God’s eye to look before me,
God’s ear to hear me,
God’s word to speak for me,
God’s hand to guard me,
God’s shield to protect me,
God’s host to save me
From snares of devils,
From temptation of vices,
From everyone who shall wish me ill,
afar and near.

I summon today
All these powers between me and those evils,
Against every cruel and merciless power
That may oppose my body and soul,
Against incantations of false prophets,
Against black laws of pagandom,
Against false laws of heretics,
Against craft of idolatry,
Against spells of witches and smiths and wizards,
Against every knowledge that corrupts man’s body and soul;
Christ to shield me today
Against poison, against burning,
Against drowning, against wounding,
So that there may come to me an abundance of reward.

I arise today
Through a mighty strength, the invocation of the Trinity,
Through belief in the Threeness,
Through confession of the Oneness
Of the Creator of creation.

I Didn’t Know That

Extollo International: Raising and Lifting up the People of Haiti

Mylee’s Mission Will Touch your Heart