Home Sports Taking the Next Step: An Interview with Noah Turner 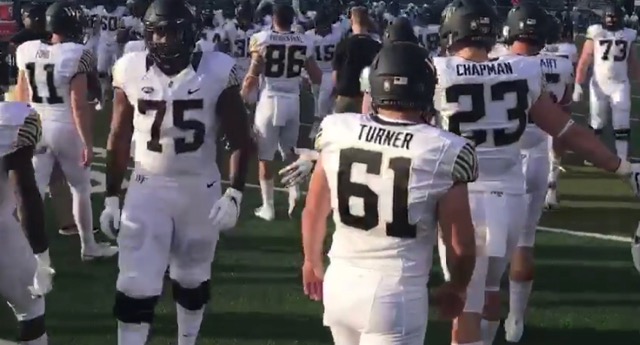 Life is filled with next steps. We begin our journey in life learning to crawl, then stand, before taking that first step to cross the room. Just as our life grows in such a manner, our faith is a series of next steps, growing throughout the years and advancing as the Lord leads us to the next step.

Noah Turner has taken the next step in life, graduating from the North Carolina high school, Western Alamance, now playing football for Wake Forest University, and is taking the next steps in his faith as he lives his testimony around campus. Noah is ready to line up against schools like Clemson, Florida State, Miami, and more. After redshirting this past season, Noah is ready to take the field next season, knowing that he has been given a platform by the Lord.

The reason I am here is because of God. I feel at home here. ~Noah Turner

“We’ve got a lot of guys returning. We have some very important seniors leaving, but I believe we have the talent and the guys to really step up in those roles,” he noted, looking forward to next season.

As he spoke about his coaching staff, he could not hide his admiration. “[Working with the coaches] has been awesome. They’ve been nothing but supportive while pushing me to be the best person I can be, as well as the best player I can be.” 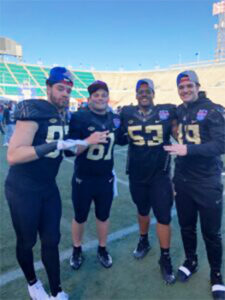 As a part of practice, when the time on the field has concluded, the coaches get with their players and ask how classes are going and ask about their families. Noah added, “You go to some schools and it’s all about football but here, it’s about family with the coaches and the players.”

“The reason I am here is because of God. I feel at home here.” When he was in the recruiting process, he has asked God to show him where he should be and within twenty-four hours, Wake Forest was calling him and asking him for a commitment. He explained the biggest adjustment as being “The time. In high school football, you practice a couple hours a day. Here, it’s a full-time job. Meetings, walk-throughs, lifts, and practice.”

Growing In His Faith

I have a little devotion I do six times a week at night, to keep in touch with God, taking time out of my busy day to give time to God because He’s the One who put me here.

“We have Athletes in Action, and I go to that with some of my teammates, and it helps me to consistently go and hear a sermon. I have a little devotion I do six times a week at night, to keep in touch with God, taking time out of my busy day to give time to God because He’s the One who put me here.”

He understands that being in the position, being put there by God, he has a bigger platform. “People are watching even when you think they are not watching. I try to walk with a positive mindset and be a good person. I try to be who God wants me to be.”

But it is written: What eye did not see and ear did not hear, and what never entered the human mind–God prepared this for those who love Him. 1 Corinthians 2:9

His favorite passage from Scripture is 1 Corinthians 2:9. On that passage, he commented, “It’s cool to know that God has a plan for my life. Three years ago, I would have never imagined I would be playing at this level of college football.”

The highlights from the past season were the Birmingham Bowl win and a victory over NC State on the road. Through the year, he began to grow a player and he grew as a follower of Christ. As he takes his next steps, he knows that with each step, his heart and his commitment will help him to achieve and see all that the Lord has in store for him.